Death of a Burmese Monk

Late last month I was saddened to hear about the death of U Kuthala Nanda, a monk at the Tat Ein monastery in Myanmar’s Shan State, on the outskirts of Nyaung Shwe. He was only 40 years old. I have visited the monastery dozens of times in the past decade and I considered U Kuthala Nanda a good friend.

I first met U Kuthala Nanda when he was an adult novice monk, having only recently entered the monkhood in his thirties after living his entire life in Nyaung Shwe. He was also the brother of my longtime friend Ma Pu Su, who runs the Bamboo Delight Cooking Class in Nyaung Shwe. 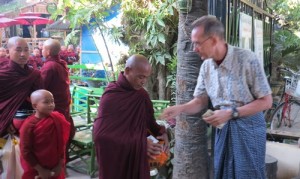 U Kuthala Nanda, or Aung Nanda as he was known before becoming a monk, had his share of difficult times, particularly in his late teens and twenties, when he was more inclined to live a wild life and seek solace from alcohol. But he eventually turned his life around and became a well-respected monk, what they call an U-Zin, at the monastery. I know that he devoted himself to teaching and taking care of the dozens of young notice monks who stay at the monastery, and I’m sure they are devasted by his passing.

Aung Thaung, one of the novice monks who spent the past several years with U Kuthala Nanda at the monastery, called me about two months ago to tell me that U Kuthala Nanda needed more money for his cancer treatment. From talking with Ma Pu Sue, I had known that U Kuthala Nanda was ill, but didn’t realize that the situation had become so dire. “I like to help people” young Aung Thaung told me after I had thanked him for letting me know the status of U Kuthala Nanda’s treatment. But despite the efforts of all of us, nothing could stop the ravage of the disease. I want to repeat the old refrain  that life is unfair, but the Buddhists also tell us the “life is suffering” so I’m confident that U Kuthala Nanda passed away knowing he did what he could during his brief time on this planet, and he left behind many, many young men who have benefited from his experiences and counsel. He will be missed. 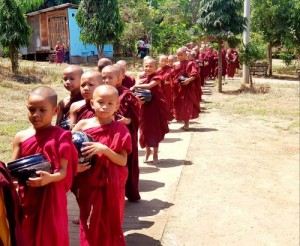 Comments Off on Death of a Burmese Monk