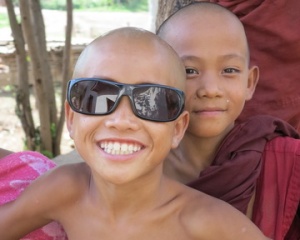 As usual, it was their idea and not my own! One of the novice monks at the monastery — I’ll place the blame solely on Naing Aung — in Shan State’s Tat Ein village asked to borrow my sunglasses. No doubt wanting to look cool, he put on the sunglasses and I prepared myself for the inevitable puzzled reaction. I’m very near-sighted and those are prescription glasses, so whenever some kid puts them on the result is pretty funny. They usually will exclaim something along the lines of: “Oh, I feel dizzy!” Sure you do! 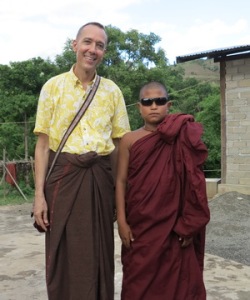 And of course once one monk tries them on, then the rest of the crew has to do the same, and the sunglasses get passed around from monk to monk. “Dude, check this out!” I always warn them about the dizziness factor but that never squelches their desire to sport the glasses … and of course get their photo taken! 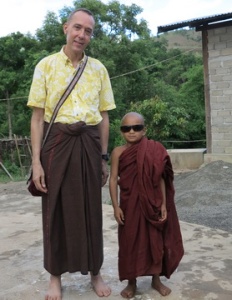 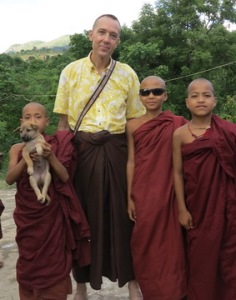 One of the more unsung musicians of the 1960s and 1970s is Florida’s Tommy Talton, a guiding force behind influential bands such as We The People and Cowboy. I grew up in Central Florida during those years and heard a lot about those bands, but I am ashamed to admit that until earlier this year I had never heard a full album by either one of Talton’s famous groups.

Cowboy, a band that Talton formed with Scott Boyer after We The People broke up, were signed to the Capricorn label (label mates and friends with the Allman Brothers) released Reach For the Sky in 1970 and 5’ll Get You Ten in 1971. Both albums (re-released last year by Real Gone Records) were laidback country-rock gems, focusing on melodic songs and soaring harmonies more than the “guitar army” slant of many other southern rock bands of that era. After the other band members left following 5’ll Get You T Boyer and Talton continued making music as Cowboy and later as a duo for the rest of the decade. They reunited in 2010 for a live album and reports have it that they are writing songs for a new studio album. Meanwhile, Talton continues to play live shows, mostly near his home in Atlanta and around Florida.

Talton cut his musical teen as a teenager when he formed We The People  in late 1965 with other Orlando area musicians such as guitarist Wayne Proctor, David Duff, and Randy Boyte. They played a lot of shows in the Orlando area and around the Southeast, and were briefly signed to the RCA label (releasing a few singles but not a full album), but never managed to break big nationally. Blame that on poor marketing and record distribution more than talent. Like Cowboy, this was a band that had an arsenal of great songs. To immerse myself in the music of We The People I recently bought Mirror of Our Minds a 2-CD collection that includes everything the band recorded during their brief existence, including tracks that the members made under earlier band-names such as The Trademarks, The Nonchalants, and the Offbeets. Most people categorize We The People as a psychedelic rock band, or garage band, but their songs also had a strong melodic foundation and sometimes exuded an R&B and soul vibe. Even at this young age it was clear that Tommy Talton was a songwriting talent. It’s not a stretch to say the songs of We The People were every bit as good as those of their more famous British contemporaries such as The Yardbirds or the Pretty Things. 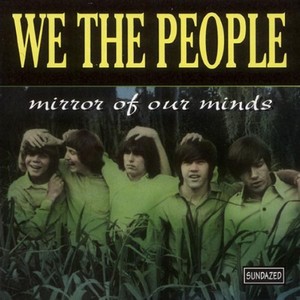 Meanwhile, here are the other albums — all legally purchased CDs — that I have been enjoying and singing to during the recent rainy days and stormy nights in Bangkok.

TV on the Radio – Seeds

Dawes – All Your Favorite Bands 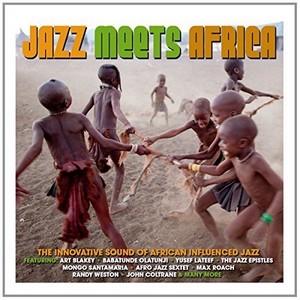 Mongo Santamaria – Up From Roots

The Grip Weeds – How I Won the War 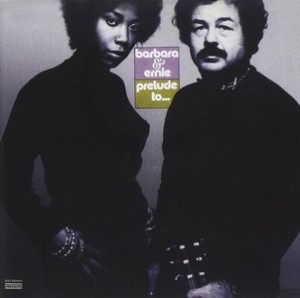 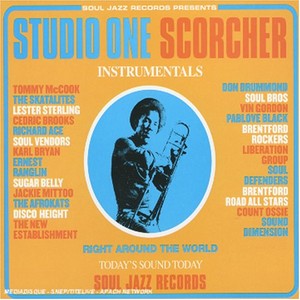 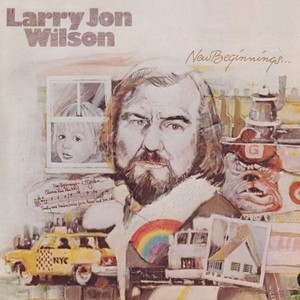 Various Artists – Por Vida: A Tribute to the Songs of Alejandro Escovedo 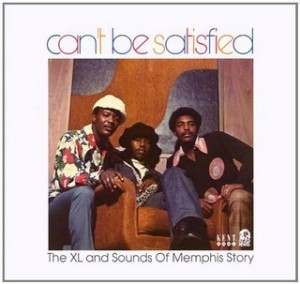 Various Artists – Can’t Be Satisfied: The XL and Sounds of Memphis Story

Belle and Sebastian – Girls in Peacetime Want to Dance

Jumping For Joy in Shan State

Before the classes start each morning at Tat Ein’s primary school, near Nyaungshwe in Shan State, the students can found outside playing games. For the boys it might by football, some form of dodge ball, or even marbles. Most of the girls, however, stick to badminton, hand-clapping games, or jumping rope.

After their lunch break, before afternoon classes commence at one o’clock, the kids are playing games again. It’s refreshing to see the children outside and having fun, moving around and jumping around, and screaming for joy. I think it’s healthy — both physically and mentally. It sure beats observing a bunch of kids huddled over a smart phone, mesmerized by digital images and poking their finger on a screen. Alas, I fear that day will be coming to Myanmar very soon too. But for now, at least in this Shan State village, the kids know how to make their own fun. 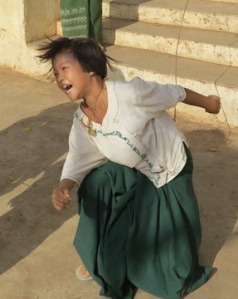 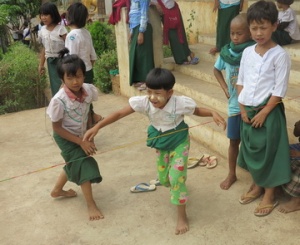 During this last trip, jumping rope seemed to be the game of choice, not only for the girls but for a few boys too. It’s a good thing that the weather cooperated during the week I visited and there were no rainstorms, or those ensuing troublesome patches of mud. Thus, it was good clean fun in every aspect. 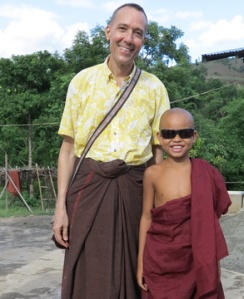 I was going to write a very negative post today, bitching and moaning about being back at work in Bangkok and surrounded by lazy employees who show up late every day and don’t have a clue as what to do most of the time. But thinking about this persistent idiocy and writing such a negative diatribe would further sap my limited energy, so let’s focus on more positive things; the people I met in Myanmar this month! Once again it was a fast and fabulous trip. Plenty of interesting sights and great memories … and this time around no bicycle spills. More stories to follow, but today just a few fun photos! 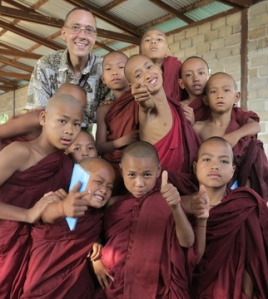 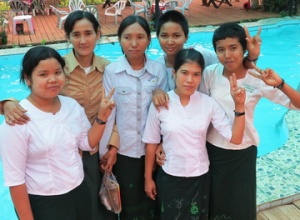 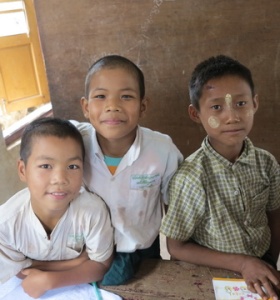 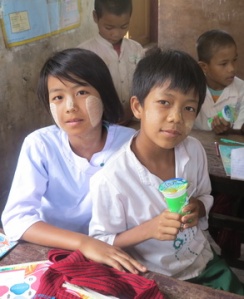 I just rode my bike back to my hotel from U Tin Chit’s teashop on 90th Street in Mandalay and witnessed an amazing spectacle; people flying Myanmar’s national flag from storefronts, cars, motorcycles, sidewalks, on nearly every block along the route. So, what’s the big occasion? It’s the big game, baby! The SEA games football final match between Myanmar and Thailand.

Needless to say, the locals here in Mandalay — not to mention all around the country — are very, very excited about this match. This is such a big event, that instead of eating with three or four local friends, I’ll be dining alone tonight at Aye Myit Tar! But I don’t doubt that they will have a TV turned on in the restaurant too. In any case, I imagine the service won’t be quite as diligent tonight. There’s just no way to compete with a major event like this one. Let the game begin!

I’m back in Myanmar, arriving in Nyaungshwe yesterday after four days in Mandalay. I’ll be here in Shan State for 5 days and will teach some English classes at the primary school in Tat Ein village. As expected, the ranks of novice monks at the monastery in the village has doubled at this time of year (the new school year just began, and for many boys, joining the monkhood temporarily gives them a chance to further their education), but I still plan on taking the whole crew to the ancient Pa-O ruins at Kakku later in the week.

This past Sunday I took a crew of kids from 90 Street to the country’s new capital, Naypyidaw. It wouldn’t have been my choice of places to visit, but most of the kids, and the three fathers who came along, had never been there before and it was their destination of choice this time. I found the newly constructed pagodas and shrines — including one that is supposed to be a replica of Yangon’s famous Shwedagon — all generically dull. But as long as the kids were happy, that was the main point, and they did indeed seem to enjoy the day. We also visited the sprawling zoological gardens, home to a variety of interesting animals.

Once again, the friendly people, fascinating places, and delicious food that abound are keeping me very content. Dishes of tasty tea leaf salad pop up at every home and restaurant that I visit, plus mangoes are in season and plates of that delicious food are “forced” on me frequently too. Hey, I can handle it! 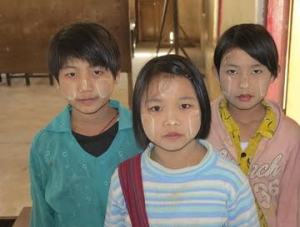 There was some rain in Nyaungshwe yesterday, enough to make the dirt road to Tat Ein village a bit muddy. But thus far, I haven’t had any bicycle spills on that bumpy road or navigating the chaotic streets of Mandalay, so hopefully that will remain the case and I don’t suffer another concussion this time around.

Monks for the Road 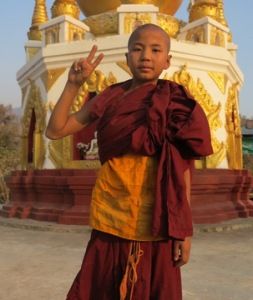 My bags are packed and I’ll be hitting the road soon, off to Mandalay and Shan State for about 12 days. As usual, one of the highlights will be visiting the novice monks at the monastery in Tat Ein village, not far from the town of Nyaunghswe, which in turn is just down the canal from the famous Inle Lake. 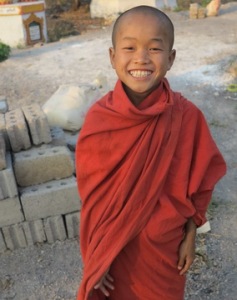 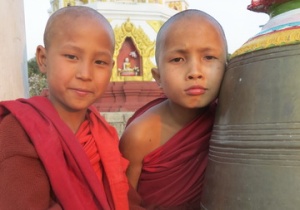 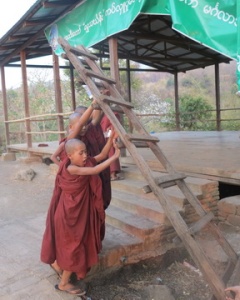 These little monks are great kids, and most come from other villages in the region. Staying at the monastery gives them a chance to get an education at the local primary school, as well as learning more about Buddhism. But what happens when they leave? I’ve been discussing a plan with Ma Pu Sue (the owner of the Bamboo Delight Cooking Class) about how I can help sponsor some of these young monks, keeping them in school after they leave the monastery. All too often in Myanmar, especially in this part of Shan State, the kids study until the fourth grade, maybe the sixth grade, and then they stop. By that point, many of the children are seen as income earners by their families, who don’t see any benefits to keeping the kids in school. 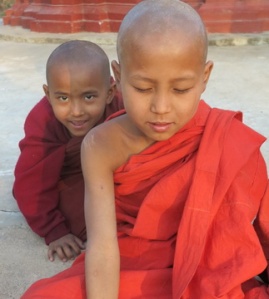 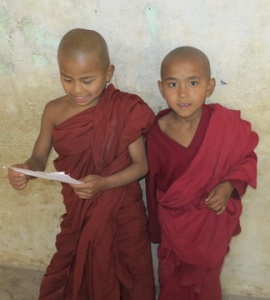 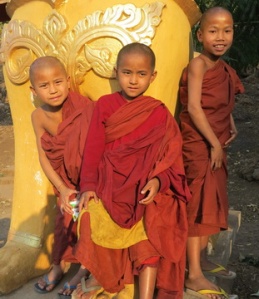 Both Sue and Kazuko, a friend from Japan who also is a big donor to the village, have helped sponsor children from this village or the Nyaungshwe area, so I’ll be relying on their advice and suggestions to make this idea a reality. And hopefully I’ll also be teaching some English classes at the school (which just started their new term last week). Looking forward to the adventure! 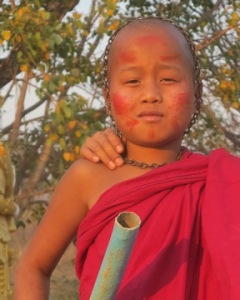 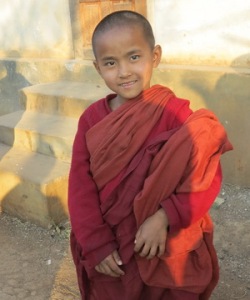 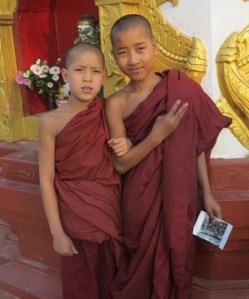