Bagan without the Crowds

One of Myanmar’s most popular tourist attractions is the city of Bagan. Actually, the area known as “Old Bagan” has almost no residents nowadays (most of those people were forcibly moved about two decades ago to an area now known as New Bagan), but Old Bagan is where you will find thousands (yes, that’s plural!) of ancient pagodas and temples, stretching across the dusty plains to the banks of the Ayeyarwaddy (Irrawaddy) River. Gazing upon those marvels of architecture is truly a wondrous sight.

Because of the increase in tourism to Myanmar in the past couple of years, Bagan has also seen the number of visitors surge dramatically. It’s not nearly as bad as the busloads of tourists that now make visiting Angkor in Cambodia such an annoying activity, but nevertheless there are a lot more tourists in Bagan these days and it’s rare that you’ll be able to enjoy a pagoda by yourself, or at least in a tranquil atmosphere. That is, unless you plan carefully. 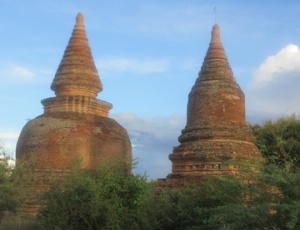 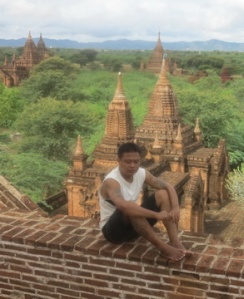 Thanks to it being rainy season, and thus the low season for tourists, and factoring in my preference for visiting out-of-the-way and less well-known sites, I managed to avoid the tourist hordes altogether during the two days I spent in Bagan. I ran into one carload of four tourists at one temple and that was it. Pretty darn amazing! 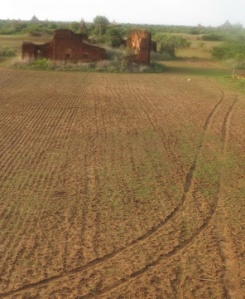 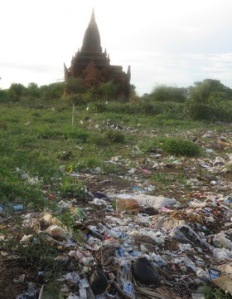 For day one of my temple excursions, I went out entirely on foot, starting from my hotel in New Bagan, skirting the site of the old morning market, and then walking further towards Nyaung U. It’s surprising how many interesting old ruins are within walking distance, as long as you stick to dirt roads and small paths, but they are definitely out there … just don’t mind the garbage-strewn byways. It was nearing sundown by the time I returned to my hotel, just in time to snap a few more photos.

On day two I rented a bike from the nice folks at Silver House Restaurant. That bike, however, had a problem with one of the tires, so I returned it and got another one. While I was walking it down the main road, a young local boy stopped to talk with me. He said his name was Phyo Phyo and was on his way to play a game of football (soccer) with his friends. After telling him of my temple-hopping plans for the morning, he asked if he could join me. I usually enjoy just venturing out on my own, but then again, it’s nice to have company sometimes too, so I told him that he was welcome to tag along. Actually, since I didn’t have a concrete plan as far as places to visit, I told him that he could serve as my guide. 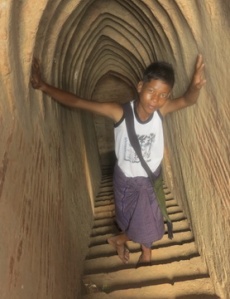 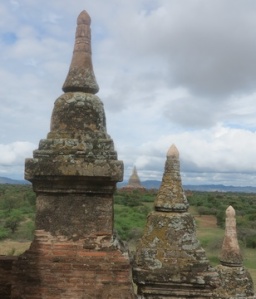 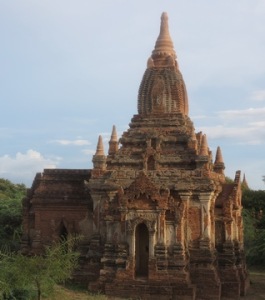 After visiting a couple of temples near the main road, we followed a dirt path that took us toward some more isolated sites. I should have paid more attention to the path, however, because at one point I ran over some small branches, ones that had large thorns on them. Even before I stopped the bike I knew what had happened: punctured tire! Sure enough, in no time at all, the tire was flat. But Phyo Phyo said that there was a tire repair stand back near the main road, so that’s where we headed. Under the shade of a tree, a man operated a little repair business. He patched up the tire — there were two holes — for a ridiculously cheap price and off we went again to explore a few more temples, one of which, if you climbed to the top, had a really nice panoramic view of the area. And I never would have known about it if it weren’t for Phyo Phyo’s suggestion. A good guide indeed!

When our morning excursion was finished (I had to be at a friends’ house for lunch, so I had to cut the tour short) I gave Phyo Phyo some money as a tip, figuring that’s what he would expect. But he looked genuinely shocked when I handed him the money, telling me that it wasn’t necessary. I assured him, however, that I appreciated him taking the time to show me around (hey, you gave up your daily football match!) and that I wanted him to accept the money as a gift. With a big smile, he took the money and wished me well. Another unexpected, but memorable encounter in Myanmar. 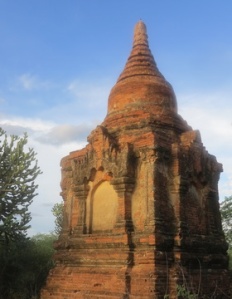