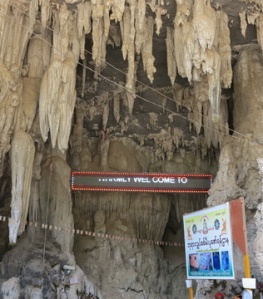 During the trip I took with the group from 90th Street in Mandalay to Shan State back in March, we visited a huge cave. Located about an hour’s drive from Taunggyi, Htam Sam Cave is a very impressive natural attraction, more interesting in my mind than the more famous Pindaya Caves, also in Shan State. It’s also much bigger and easier to navigate. 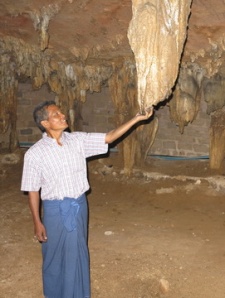 As usually happens during these trips, I let Ko Maw Hsi and our driver, U Kyaw, select a few sights to see and this was one of their picks. I’d only vaguely heard of this cave before, knowing that it was “discovered” by some villagers only a few years ago and until very recently foreigners were not even allowed to visit. But now that permission has been granted, foreigners are welcome, uh, just as long as you pay the steep $20 entrance fee. That’s right, twenty US bucks! Compare that to the $5 charge at Pindaya and something seems out of whack. When the monk at the ticket table announced the fee, I audibly gasped and expressed my outrage. And when they told me that I would have to give back the laminated “pass” that my twenty dollars bought when I was finished with my tour of the cave, I expressed even louder disapproval. “For twenty dollars I think I should get some sort of souvenir to keep,” I suggested. 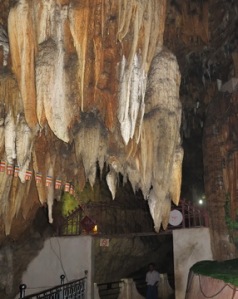 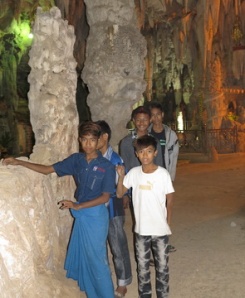 At this point I was speaking so loudly that I may have been scaring the monk and his comrades, so he quickly granted my request, no doubt hoping that I’d get the hell out of the way before I made a total scene. Usually I’m not so demanding and belligerent, but the high ticket price really did throw me for a loop and wasn’t going to meekly accept it without voicing my opinion. In any case, the caves themselves really were impressive. If you’re in the Taunggyi area, it’s well worth a visit. 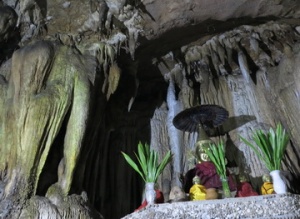 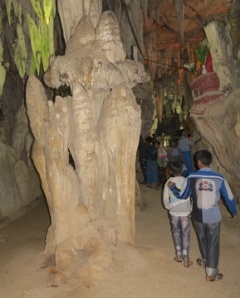 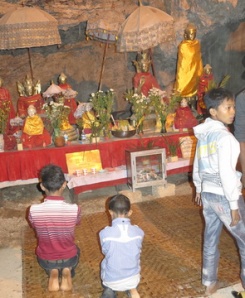 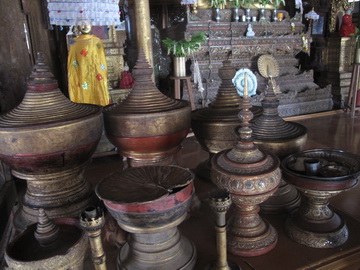 I’m thinking a lot about Myanmar lately, as I begin planning my next trip over there. As the days fly by I realize my departure date is less than two months away. Holy monhinga … time to start picking out which longyis, in my ever-growing collection, to wear. All this trip preparation reminds me that I still have a bunch of photos leftover from my last trip that I haven’t posted yet. So, on that note, here we go: 21 more reasons to remember Myanmar. 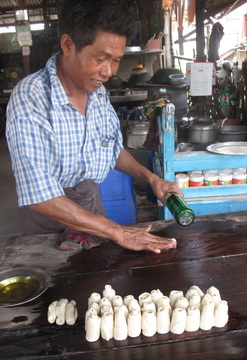 Making morning treats at a small neighborhood teashop on 90th Street in Mandalay.

Students at a village school near Inle Lake play games during their lunch break.

Early morning cyclist on a muddy street in Nyaungshwe.

Tapping and blowing out a tune in Shan State!

Students at Tat Ein’s primary school peek under the partition to check out what I’m teaching in the other class.

Ko Maw Hsi and his daughter in Mandalay. 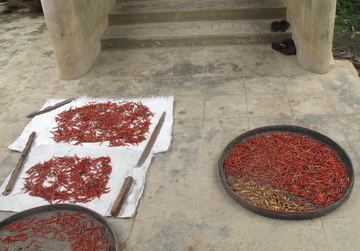 Drying out chili peppers outside a monastery near Nyaungshwe.

Even monks enjoy a game of late afternoon football!

A student in a pretty hat poses in front of a pretty plant at a temple near Pindaya.

Taking aim while playing the shoe game at a pagoda in Amarapura.

A monk in Mandalay during his morning meditation walk.

Checking out the tunes at the teashop on 90th Street in Mandalay. 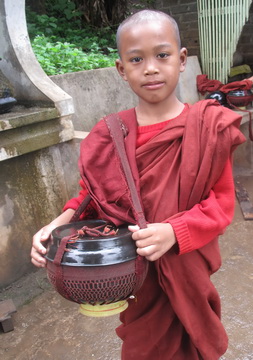 Novice monk with his alms bowl outside the monastery at Tat Ein village in Shan State.

Dancing the day away in Amarapura. 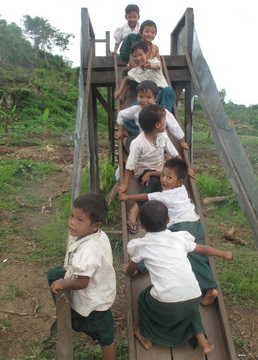 Students at a village school near Inle Lake play on the slide during their lunch break.

Monks on the Road: Pindaya Caves

For as long as I’ve been coming to Nyaungshwe — “the gateway to beautiful Inle Lake” — I’ve always paid daily trips to Shwe Yan Pyay Kyaung, the lovely old teakwood monastery nestled on the outskirts of town. The monastery has these very distinctive huge oval windows, and it’s not unusual to find some of the novice monks peeking out from behind the windows or posing in front of them for photo-snapping tourists. I’ve taken more than my share of photos here too, and I’ve even let the monks borrow my camera and let them take shots themselves. Let them loose for a few minutes and before you know it there are an extra hundred shots on the memory card. The cast of monks changes slightly each year, but every time I return there are always a few dozen familiar faces. They’re nice kids and I look forward to seeing them each year, chatting with them in Burmese (obviously not my native language, but not theirs either; most of them come from Pa-O tribes), and taking more photos in and around the monastery.

In recent years I’ve take some of them on days trips in the area, either to Taunggyi or to see the ruins in Kakku. The first few trips I took only two or three monks at a time, then last year the number crept to five. For my trip this year, the destination was the Pindaya Caves and the total climbed to eight novice monks. Needless to say, a bigger van was required this time. Of the five that I took to Kakku last year, not a single one could go this time. One monk had transferred to another monastery, while the remaining four had exams coming up the following week and needed to study. Or at least they were told by the Saya Daw (abbot) that they had better stay and study. And even though I know these guys wanted to go to Pindaya (we had talked about it last year) they were certainly not about to doubt the advice of the Saya Daw. So I ended up with a group of younger monks that I had never travelled with before. I knew a couple of them from previous trips, but not well enough that we’d ever had lengthy conversations. So, rather than picking out who to take, I basically let them arrange who would go. And of course it ended up being a nice bunch of youngsters.

The van picked me up at my hotel and we got to the monastery before 8:00 that morning, after the monks had eaten breakfast and gone on their alms rounds. The first order of business was meeting with the Saya Daw and getting his blessing for the trip. I’d already asked him the day before, so this was more of a formality. He’s a really nice man and I enjoy talking with him. He’s always asking me questions about Ayoddaya (the name many people in this region use for Thailand) and my travel plans. And he always gives his consent for the monks to travel with me. This time was no exception. But you could tell the younger monks were a bit nervous and intimidated by the process of asking for permission. As they sat respectfully in front of him, the Saya Daw would call out their names, ask some questions, write something in his notebook, and then grunt his approval. After all eight monks had gone through this ritual, we were ready to roll. But first … car sickness medicine!

On more than one occasion I’ve had monks lose their breakfast in the car, so I was prepared with pills that I’d bought at the pharmacy the day before, and a dozen plastic barf bags. I had rehearsed my “vomit speech” earlier. I told the monks that the road to Pindaya would wind up and down through some very steep hills. Sometimes, I added, people get car sick or feel dizzy and will vomit. So … you may want to take these little pills right now if you think you might be susceptible to such a condition. I handed them each a bottle of water and passed out the pills. NOW we were ready to roll on down the highway. 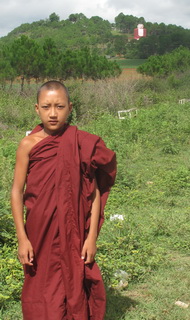 The trip to Pindaya took about two and a half hours. And yes, three of the monks did get sick. They weren’t the smaller ones, as I would have expected, but the oldest ones in the bunch. But hey, when you aren’t accustomed to travelling in vehicles like this, it doesn’t really matter how old you are. Sick is sick. We stopped a few times along the way for photos — the elevated railway bridge between Heho and Shwe Nyaung junction is always a picturesque spot — and passed the scenic town of Aungban before arriving in quaint little Pindaya. Buddhist monks can’t eat after noon, so they usually have their final meal of the day around 11:00 each morning. It was only about 10:30 when we arrived in Pindaya, but rather than heading over to the caves straight away, we decided on an early lunch. The van driver picked a clean looking little restaurant on the main road and it turned out to be a great spot; very good food and friendly service. The women running the place asked me all sorts of questions and fussed over the monks. 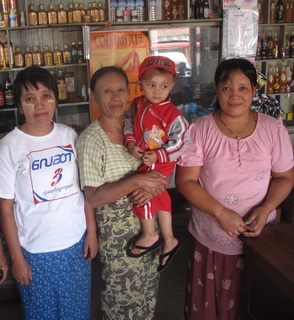 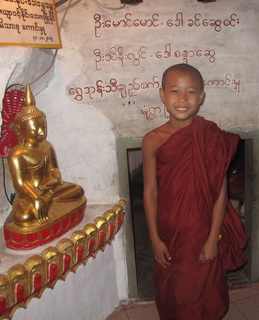 With our bellies full, it was time to explore the Pindaya Caves, famous around Myanmar, not for bats or stalagmites, but for its thousands of golden Buddha images. The latest count has over 8,000 of the glittering images tucked inside the caves. The caves are set inside limestone cliffs, perched high over a lake. Outside the scenery is quite lovely and inside it’s simply majestic. I’ve heard the term “gaudy” used to describe the interior of the caves, but I don’t think that’s a fair criticism. Just about anywhere your gaze falls you will see glittering Buddha images of various sizes. The sea of images make for an amazing visual tapestry, and my crew of young monks seemed absolutely dazzled by it all. In addition to the panorama of Buddhas, the monks seemed to enjoy one additional aspect to the cave visit: their first elevator ride! Many years ago, the only way to get to the caves was to make a steep climb up the hill on foot. But now with a glass elevator installed, you can not only get to the top without tiring out, but you can enjoy the nice view too. And the monks were able to do just that. Seeing the look of wonder on their faces was absolutely magical. And the best part: nobody got sick!

Of course the monks wanted their photos taken, both inside and outside the caves, and I was more than happy to oblige. At one point, while we were on the way out — about to take photos in front of the “giant spider” that guards the caves — a couple of Spanish tourists stopped us and asked to have their photos taken with the monks. And of course the monks were quite happy to accommodate that request. Next time I’ll have to come prepared: Monks on tour! Get your souvenir t-shirts now! 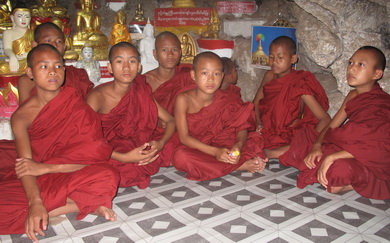 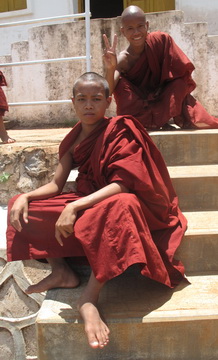 On the way back to Nyaungshwe we stopped at some sort of sacred temple, one where a highly revered monk’s body is kept under glass. I always find those sort of displays a bit unsettling so I ducked outside and took shots of some of the monks frolicking on the well manicured lawn. Zonked out by the day’s strenuous activities, most of them napped on the way back. And not a single one got car sick this time. As we approached the foot of the green Shan State hills we were greeted by a rainbow on the horizon. A perfect way to end this day. 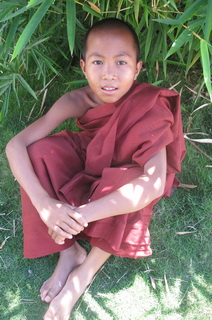