In any city I visit, I like to spend a lot time just walking around and absorbing the feel of the place. In addition to how it looks, each place has a different vibe, even its own unique smell. The scenery can also provide plenty of contrasts; modern buildings or run-down shacks, parks or ponds, museums or markets, mosques or pagodas, games of football or a single child playing marbles. It all interests my wandering eye.

Kuala Lumpur doesn’t boast much in the way of magnificent scenery and there aren’t many older, historic buildings to gawk at, but they do have plenty of impressive skyscrapers (the famous Petronas Twin Towers being the obvious highlight), a forest preserve that gives the city green space (the bird and orchid parks are quite nice), and some areas full of street food vendors. KL is also easy to navigate thanks to a very good — and affordable — commuter rail system, including an inner city monorail and several subway lines. 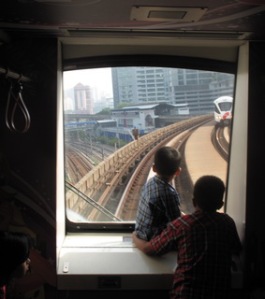 At my hotel one day I overheard two employees speaking Burmese. I surprised them by striking up a conversation in Burmese. The young man told me that he was from Yangon and the woman hailed from Mandalay. I told them I had visited Myanmar the previous month. In fact, I still had photos on the memory card in my camera, so I showed them some of the images; Pindaya Cave, monks amuck in Mandalay, pagoda ruins in Bagan, and other scenes. I asked if there were any Burmese restaurants in the area near our hotel, and they told me that indeed there were. They directed me to one large restaurant, just a block from Central Market. I found the restaurant easily enough, thanks to a sign written in Burmese. Stepping inside I felt like I was back in Yangon or Mandalay.  There were huge colorful wall murals of various natural and historic sites around Myanmar. Burmese pop music was played in the background. There was even Myanmar Beer on the menu! Pretty damn cool to find this little Burmese oasis in the heart of Kuala Lumpur.

For breakfast that morning I ordered a hearty bowl of monhinga, along with a cup of Burmese style tea. The food was good and I enjoyed speaking with the waitress in Burmese. I don’t get many chances to speak the language when I’m in Thailand so it’s always nice to practice with someone before it’s time to go back to Myanmar. I returned to the restaurant the next night and before I had even ordered the same waitress told me that they were out of monhinga. I hadn’t planned on eating that for dinner anyway, so I had a hearty bowl of Shan kauk swe noodles. And outside the restaurant there was yet another touch of Myanmar: a guy rolling up packets of betel nut and selling them at a little wooden stand. 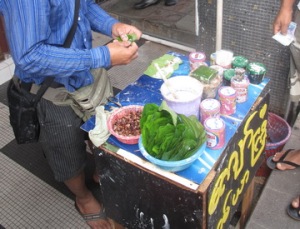