After Mt. Popa, the next stop on my journey with the crew from 90th Street in Mandalay was Bagan. We arrived in Bagan early in the afternoon of the first day. I stayed at a hotel in New Bagan, but Maw Hsi and the kids opted to stay at a monastery closer to Old Bagan. I’d offered to put everyone up at the same hotel (a place I’ve stayed at many times over the years,  and was assured of a discount with a group this big), but Maw Hsi seemed very concerned that I’d been spending too much money on these trips and didn’t want me splurging more than needed. 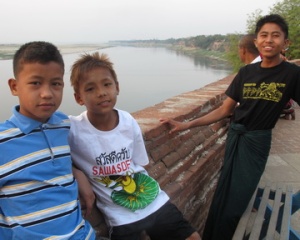 After a short afternoon siesta the truck picked me up around five that afternoon and we headed over to the nearby Lawkananda Pagoda, perched on the banks of the Ayeyarwaddy River. The pagoda was under repair, with bamboo scaffolding covering most of the dome, so other than some nice views of the river there wasn’t much to see there. I suggested that we visit a smaller group of pagodas closer to Myinkaba where we could watch the sunset, and more importantly not be run over by any tour groups. There are several pagodas in Old Bagan that serve as popular sunset spots, but most of those are horribly crowded nowadays. 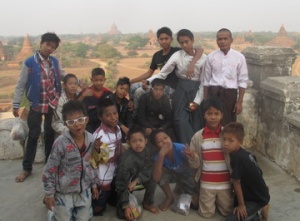 The kids managed to find a few temple caves in the area and made mad dashes through the dark interior and back outside, screaming happily the whole time. Good, silly fun. After that short sightseeing stint we headed back to New Bagan and had dinner at the outdoor Shwe Lan Thit Restaurant, just down the dirt road from the Thazin Garden Hotel. I knew the owner when he managed the nearby Mi San Restaurant, so I make it a point to patronize his place when I’m in town. It’s not expensive by any means — most dishes cost around two to three US dollars — but I sensed that Maw Hsi was a bit uncomfortable with ordering from the menu, so we settled on fried rice for everyone, plus pork with black bean sauce (a Bagan specialty that I crave) for me. The owner threw in free plates of French fries as appetizers, adding to the very good meal. The kids, especially Zin Ko, also had fun playing with the cloth napkins and making hats out of them! 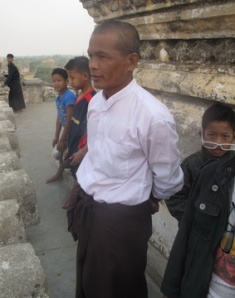 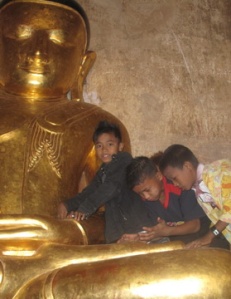 We did some more Bagan sightseeing on our final morning before returning to Mandalay (I’ll have a separate post about our long Day 2 trip later), stopping to visit most of the more popular pagodas in the area around Old Bagan. I’ve been to these sites numerous times before, but just like Angkor in Cambodia, I never get tired of marveling at these ancient wonders. At Bagan, the plain of ancient pagodas dotting the horizon — no matter which direction you are facing — is positively spellbinding. But the children, being the silly youngsters that they are, seemed more interested in buying snacks or posing for photos than admiring the architecture. Ah well, what can you do? 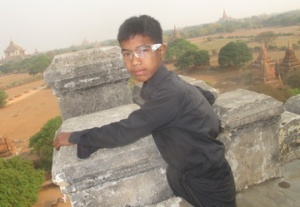 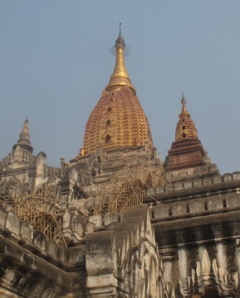 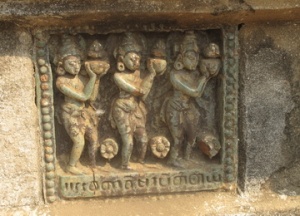 Before leaving Bagan, we stopped at the monastery where the group had stayed for two nights and had lunch there. As with most monasteries where I’ve eaten in Myanmar, the meal was very tasty and second helpings were offered. And also, as usual, because I’m a foreigner, they plied me with instant coffee and little cakes afterwards. Enough already! I asked Maw Hsi how much I should give to the monastery, some sort of donation to thank them for their hospitality, and as is usually the case when I ask “how much,” I was given a non-committal answer. So I just came up with a figure that I thought was fair and left it at that. 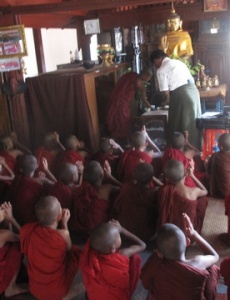 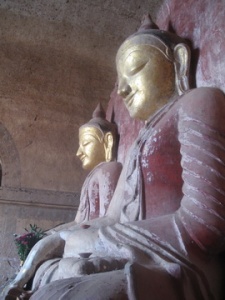 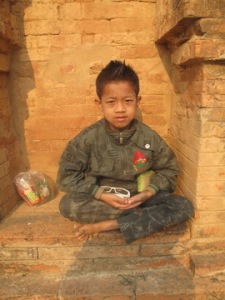 After lunch we were back on the road for the final dusty leg of the journey back to Mandalay. Frankly, it had been an exhausting three days, but other than a few minor arguments amongst themselves, the kids behaved well and it was truly a pleasure travelling with them, Maw Hsi and the two other parents (who took turns driving). Once we were in Mandalay and rumbling down the narrow stretch of 90th Street near Ko Tin Chit’s teashop, the kids broke into a song and started clapping their hands, big smiles all around. It’s those sorts of spontaneous acts of genuine happiness that endear me this country, and these people. Can’t wait for the next trip! 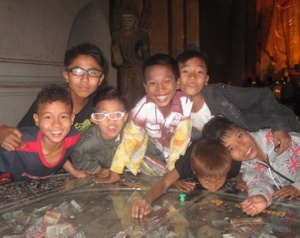 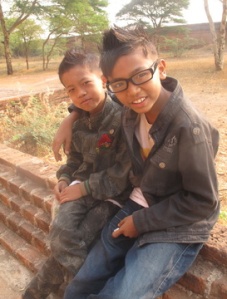 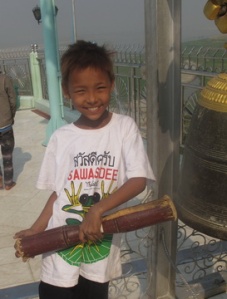 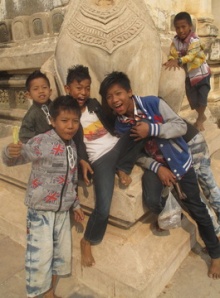 Up early for a sunrise one day while in Bagan; pedaling my bike down the sand-strewn streets to a secluded spot between New Bagan and Nyaung U. From there, I was able to view the sun rising over the rice fields and peeking behind pagodas. 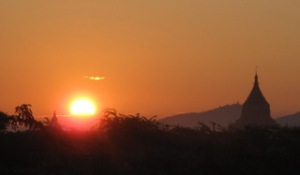 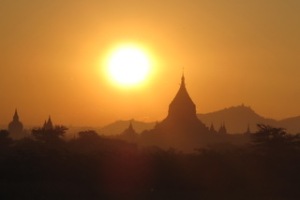 The following day, I found another secluded spot for a quick glimpse of the sunset. Not a soul in sight, and the grounds were also mercifully free of any stray farm animals. Splendid isolation, as the great philosopher Warren Zevon once said. 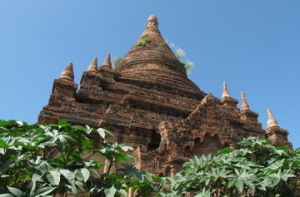 As I mentioned in a recent post, Myanmar was absolutely crawling with foreign tourists when I visited in late October and earlier this month. I had not intended to visit Bagan this time around, but due to my earlier-than-planned departure from Bangkok — fearing the incipient threat of floods — I had extra days at my disposal once I arrived in Myanmar. I pondered a short visit to Mawlamyine, a city I still haven’t seen, but after being assured by my travel agent in Yangon that there were still some available seats on a flight to Bagan, I took that option instead.

I’ve been to Bagan well over a dozen times and I thought I had pretty much seen most every pagoda worth seeing at this point. Oh, how wrong I was. Instead of using my friend Gaw Soe and his horse cart to tour the ruins, I decided to use only a bicycle this time, renting a dependable set of wheels from U Aung Koont at the Silver House Restaurant in New Bagan. I ended up taking some paths and trails that I had never explored before, and discovering some pretty cool pagoda ruins I had never seen before. None of them were towering monstrosities or among the more popular ones in the area, but they were no less interesting or charming. And the best part: at each and every site, I had the place to myself, never running into any other tourists. 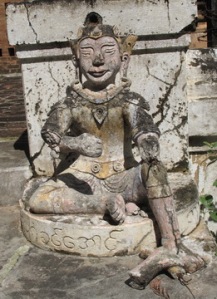 The only downside to my “off the road” explorations was the two flat tires I got one day. But that was my fault for taking a shortcut through the woods and thinking those thorny branches on the ground wouldn’t do the bike any harm. Next time, I’ll leave the bike on sturdier ground and hike the rest of the way to any ruins on the horizon. One other negative to cycling this time around in Bagan: on many of the paved roads in the area there were huge patches of sand, making it tricky if not impossible to ride. I had to hop off the bike several times and push it through the sandy bits. I’m used to doing that on trails in the area, but not on main roads! I asked locals why there was so much sand on the roads, and they all told me it was due to heavy rains in recent months. Okay, I can accept that explanation, but why has no one bothered to clean up the mess? In Yangon and Mandalay I see crews sweeping the streets every morning. Doesn’t Bagan have people with similar clean-up skills? They really need to do something about this problem quickly. Even locals driving motorcycles tell me that they find the sandy roads a headache. I can just picture a foreign tourist wiping out on a sandy stretch of road and breaking an arm or leg. 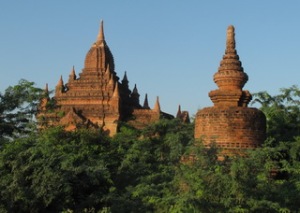 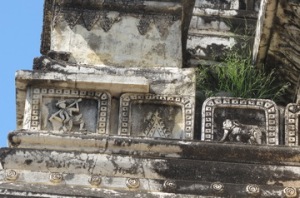 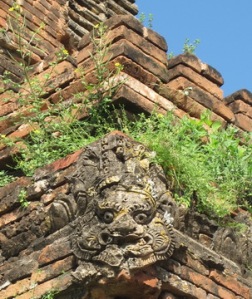