During the full moon period of Tazaungmon in November — the same time as the famous balloon festival in Taunggyi — there is also a ceremony called Kathein that is held in villages and cities throughout Myanmar. During this important ceremony an offering of “Holy Robes” are given to monks in area monasteries.

In addition to the traditional giving of robes, Kathein has spread to include donations of other kinds. Items ranging from toothpaste and soap to noodles and crackers, and especially bank notes, are collected and given to monasteries. Some of these donations are collected and decoratively mounted on stands that resemble trees. During my recent trip I saw these “Kathein Trees” everywhere; in homes, restaurants, street corners, schools, and shops. I asked my friend Ma Thanegi, who lives in Yangon, for clarification on this Kathein thing, specifically the name of these tree-like donation displays. She told me that they are called Padaythar Pin in Burmese, which roughly translates as “Tree of Plenty,” although she prefers the term “Tree of Treasures” because she thinks “it sounds nicer!”

Traditionally, the collection of Kathein offerings starts after the Full Moon day of Thadingyut in October and lasts until Tazaungmon comes around in November, the exact dates of which are always changing according to the lunar calendar. I didn’t make it to the Kathein ceremony when I was in Taunggyi this time, but it’s renowned as being the most spectacular in all of Myanmar, with “a thousand and one gifts” donated to local monasteries. 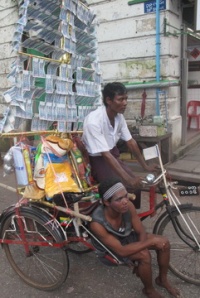 I’ve lost track of the number of times that I’ve visited Myanmar. I reckon I’ve made about 20 trips at this point, but I have yet to become bored. Of course I’ve seen most of the popular sites on the tourist trail by now, and more than a few off the beaten path too. So what keeps me returning again and again and again? The answer is easy: the people. Sweet, polite, charming, hospitable, resilient, patient, and just plain nice. Any positive adjective applies; they are all that and more. Here are some photos of a few of the people that I shared time with on this trip. 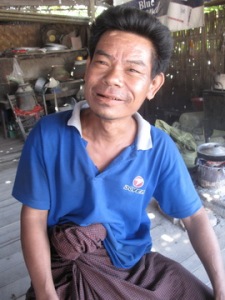 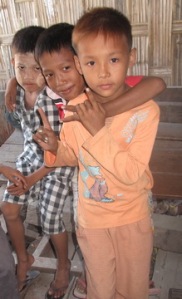 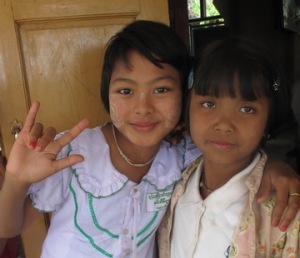 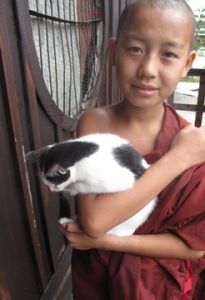 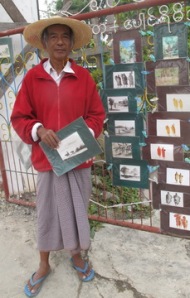 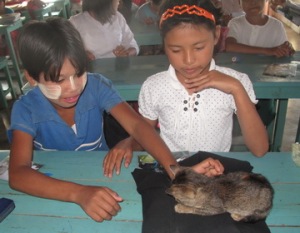 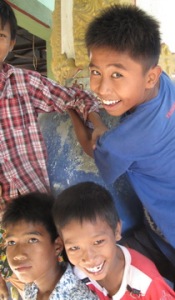 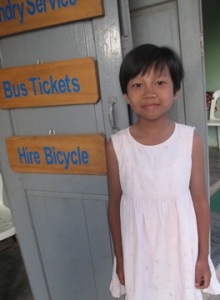 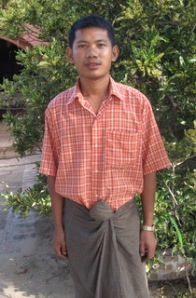 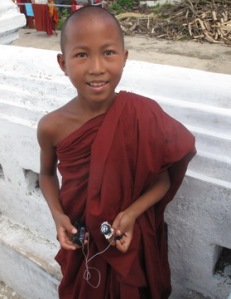 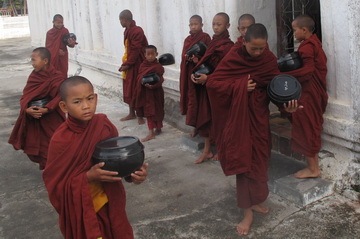 While I was in Nyaungshwe earlier this month, I got up early one morning and cycled over to the Shwe Yan Pyay monastery to take pictures of the novice monks as they made their alms rounds. The monks line up every morning at about 6:45, preparing for the walk around the neighborhood, where villagers dish out offerings of rice and other food. There are about thirty novice monks at the monastery, but not all of them make the walk every morning. Some of them stay behind, from what I can ascertain, to clean the grounds or study. Nobody sleeps in!

These young monks are a very polite and respectful bunch, but that doesn’t preclude them from having fun and acting a little goofy while they are waiting for the alms walk to commence. Prior to lining up, I noticed one novice kicking around a small rock (no doubt thinking he was the next coming of Lionel Messi; most of these guys are big football fans), while another one poked his friend in the ribs with a stick. Two others diligently inspected a younger monk’s head to make sure that no unwanted insects had taken up residence there. Once a senior monk appeared (hmm, maybe THEY get to sleep in), they were all ready to make the march through the village on the other side of the road.

I tagged behind for the first half-mile, and then jogged ahead to take some photos as the villagers made their offerings. Even at eight in the morning the sun rays were intense. “It’s hot, isn’t it?” one of the less shy little monks commented as we trotted down the dirt road. “It’s VERY hot,” I agreed, wiping sweat from my brow. Quite a change from when I was last there in December and the weather was chilly. 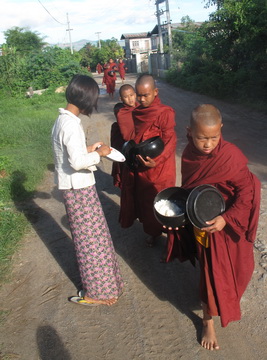 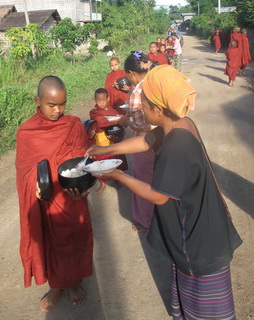 By the time we returned to the monastery about forty minutes later, the “perfect line” of monks had broken into a disorderly mess. It was obvious that some of the smaller ones couldn’t keep up with the others. Plus, that’s a pretty long walk in your bare feet, even if you do get to kick some rocks around. 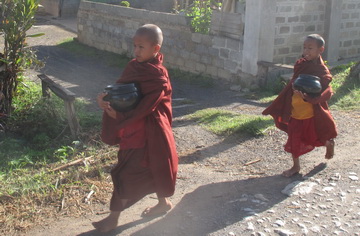