I was in Cambodia late last month, just a three-day trip to see friends in Siem Reap. It many have been a short trip but it was a very expensive one, thanks to the outrageous airfare that Bangkok Airways charges (the continue to hold a virtual monopoly on that route, being the only Thai carrier that flies to Siem Reap), plus all the money that I gave to the four Try brothers, friends of mine that I’ve been helping (school and family expenses) for the past decade. Another friend is going through a divorce and having a bit of financial trouble dealing with the aftermath, so I helped him out a bit too. But hey, it’s only money, and the bottom line was that it was really great to see everyone again. I met them all when I was working in Siem Reap a decade ago (2002-2004), but I think we’ve become even closer in the years since I moved back to Bangkok. 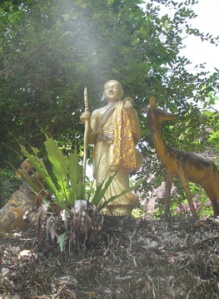 I also had a chance to visit with Dave and Den at Peace of Angkor Photo Tours on Wat Bo Road. Dave showed me some live music videos that he’s been shooting around town. Apparently the live music scene in Siem Reap is growing along with the rest of the once sleepy town. Dave was also excited about going to Phnom Penh to see the band Dengue Fever perform a show the following week. His assistant, Den, announced that he and his wife are expecting their first child later this year. I asked him if he was excited or scared, and his answer was “both!” Den is always very helpful and this time around he booked a hotel room for me, along with arranging for airport pickup, and dispensing advice on a variety of subjects. Dave’s lucky to have someone so dependable, knowledgeable and personable working for him. At the airport I was greeted by my old friend Chamrong, who works with the ground crew there. Always nice to see a smile face waving at you when you step off the plane.

For most of the three days, I just relaxed; taking naps, reading books, listening to music on my MP3 player, and chatting with friends. We ate most of our meals at the nearby Hawaii Restaurant, run by a sweet family that I’ve known for many years. They always serve tasty fun and their pool table gets a serious workout when we’re camped out there. Each night my friend So Pengthay would also join us for dinner … and more than a few beers. He also brought his wife and two children along one night, lamenting the fact that his kids didn’t like sharing toys, so he ends up having to buy two of everything. He was now worried about his four-year-old daughters increasing fascination with his iPhone. She already is able to navigate several features, from looking at photos to singing along with the recording of “Twinkle Twinkle Little Star.” Which is sort of cool, but Thay realizes that his one-year-old son is going to want to share in that joy soon too. Ah, the joys of raising children! 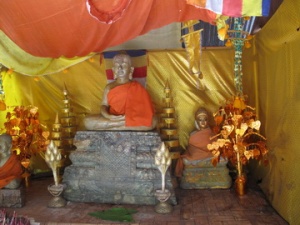 The only real outing we took this time was a half-day trip to Phnom Kulen, a popular sightseeing spot about an hour outside of town. It boasts some ancient Khmer rock carvings on a shallow river bed, and many locals go there to swim or have picnics. There is also a very sacred Buddha shrine at the top. I’ve been there several times over the years, and wasn’t that eager to go back again, but I was outvoted by the Try Brothers. Hach especially wanted to go, and he invited two of his friends to join us. Thay got us a good deal on a van, so we all packed into that for a fairly comfortable, although the road leading to the top of Phnom Kulen was pretty rough and bumpy. At least nobody puked this time around! 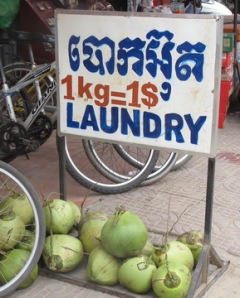 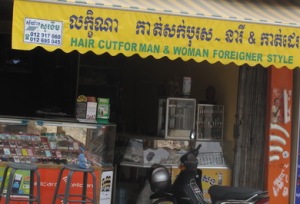 Here are a few more shots I took in Siem Reap last month. When I wasn’t touring the ruins at Angkor, or eating meals at Hawaii Restaurant, I spent time walking around town and looking at funny signs. One day I went with a group of friends to West Baray for a long overdue swim. Maybe not the cleanest water around, but it felt mighty refreshing in the middle of a hot afternoon. 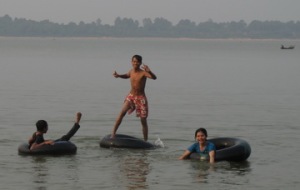 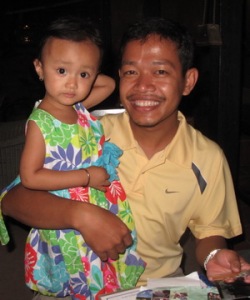 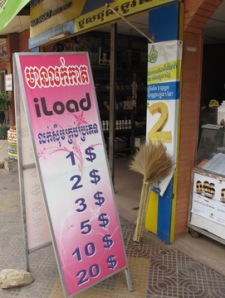 Just a quick post today; I’m on the road in Cambodia, visiting friends in Siem Reap and Phnom Penh. The plan was also to go to Battambang for a day or two, but the Try brothers changed their minds and decided to stay longer in Siem Reap (where they used to live, and where I first met them 10 years ago) to visit friends of their own. No problem for me; it saves having to book more transportation and hotel rooms. Plus, it’s nice to actually relax and do not much of anything for a day or two.

It’s been a very pleasurable trip so far. I met my friend Sochiet for dinner in Phnom Penh the first night and we talked about how much that city has changed in the past decade. Indeed, there are now skyscrapers being built and modern shopping centers popping up around the city; things you never could have imagined in the late 1990s. Sochiet is in between jobs right now and working nights as a motorcycle taxi driver. He’s an extremely bright young man, and speaks nearly fluent English, and I hope he can secure a better job soon.

Dave Perkes from Peace of Angkor Tours was also in Phnom Penh earlier this week and was headed back to Siem Reap on Tuesday, so he offered to give me — and the four Try brothers — a lift to Siem Reap. More traffic on that road than ever before, which slows down a trip that had been faster after the highway was resurfaced a few years ago. Oh well, it’s still a scenic drive.

Here in Siem Reap, as usual we’ve had most of our meals at the Hawaii Restaurant on Wat Bo Road, where the food is good, the service always friendly, and the kids can play pool.  As usual, they beat me every game. My friend So Pengthai, a tour guide, has been busy with clients most of the week, but we met for dinner one night. He brought along his 2-year-old daughter. His wife has to stay home and take care of their newest arrival: a son that was born two weeks ago! Speaking of new events, my friend Rong, who works at the Siem Reap Airport, also met us for dinner one night and brought something new of his own: the young woman he married three weeks ago! And to top off the list of things going on, So Pengthai is headed to Phnom Penh next week to apply for a visa at the US Embassy. His tour company wants to send him to a training course in Cleveland (Cleveland?! Yes, that’s the plan!) in late April. Needless to say, he’s quite excited, but also a bit reluctant to leave his wife and newborn son for the six weeks that the course will take.