It’s April, one of the hottest months of the year here in Thailand, or anywhere in Southeast Asia for that matter. For the past month, I’m witness to an almost daily occurrence; customers walking into my bookshop, either sweating profusely or complaining about the heat. Yes, it’s very hot out there, but it occurs to me that some of these folks wouldn’t sweat as much if they weren’t wearing all black or heavy fabrics that don’t breathe in this tropical climate. It’s Thailand, not Northern England, so dress appropriately! 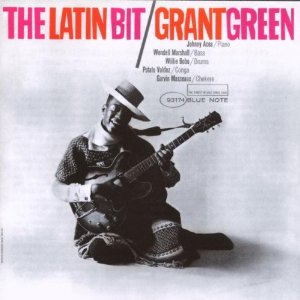 To comfort all those heat-stricken souls I run the air conditioner continuously at my shop, but when I’m at home alone I opt not to turn on the AC. Hey, I’m from Florida; hot and humid feels natural to me! But it’s not like I prefer to sit and sweat the whole time. At home, I turn on the ceiling fans and open the windows to let a nice breeze flow through my ninth floor corner apartment. And that’s enough to keep me cool. Of course it also helps that I walk around the room wearing nothing but a loincloth. But whether I’m at home or work, music is always playing; yet another way to keep cool, at least emotionally. Here is this month’s list of CDs playing in heavy rotation at my place: 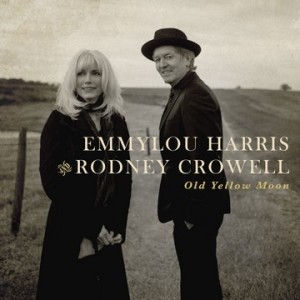 James Iha – Look To the Sky 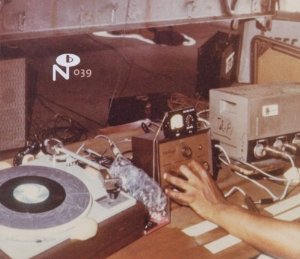 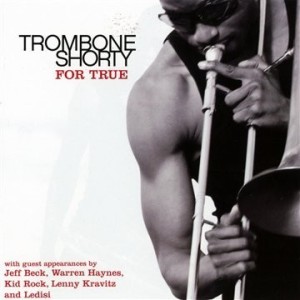 The Scene is Now – Total Jive 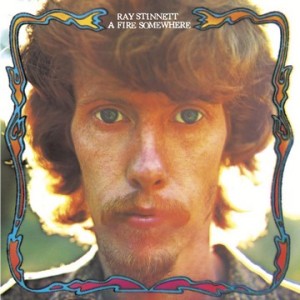 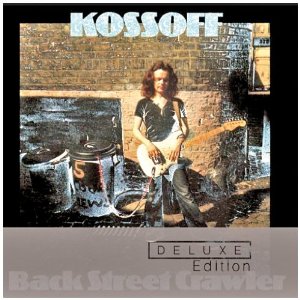 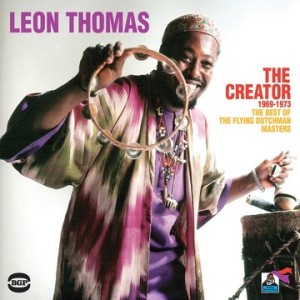 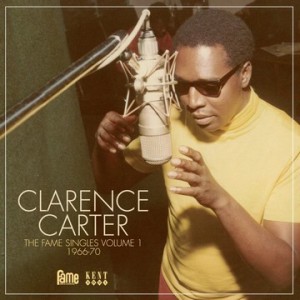 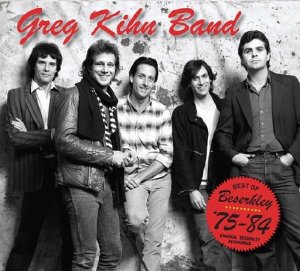 The Waterboys – A Pagan Place

One of the most gifted singer-songwriters in American music, yet one of the most unrecognized over the past several decades, is Jesse Winchester. His songs have been covered by the likes of Jimmy Buffett, Joan Baez, Wilson Pickett, Elvis Costello, Emmylou Harris, Ian Matthews, Nicolette Larsen, the Everly Brothers, and many others. Winchester is a talented performer in his own right and recorded several highly acclaimed solo albums. Back in the 1970s, a review in Rolling Stone magazine even called him “the voice of the decade.” Yes, he’s that good. 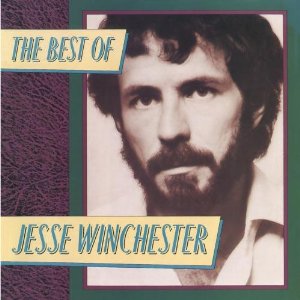 Winchester has always comfortably straddled different musical styles, from folk and country to pop and R&B, but he never really broke out of the “critic’s favorite” corner and achieved mass success. One problem for him was the inability to play shows in his native United States during the prime of his career. For most of the 1970s, Winchester could not even set foot in the USA due to his status as a draft resister. In 1967 he had fled to Canada to avoid the US draft, and a subsequent stint in the Army, which at that time would have meant fighting in the Vietnam War. You have to admire someone like Jesse Winchester who stuck to his principles and refused to join the ranks of those fighting in yet another ill-thought US-led war. Even to this day, there are frightening numbers of misguided people who still believe they are “protecting people’s freedoms” by going off to war and fighting for their native country. The government, of course, loves subservient mindless patriots like that. I could go on and on about such patriotic nonsense, but I’ll save that diatribe for another day. 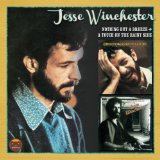 Winchester’s decision to move to Canada, naturally, was a big, big deal at the time. Being a notorious “draft evader” caused him no small amount of grief and verbal abuse and there were more than a few idiots who accused Winchester of not being patriotic, or worse. It wasn’t until 1976, after receiving amnesty from the government, that Winchester was able to return to the US and finally tour for the first time. But by that time, the golden era of the singer-songwriter had started to fade, and Winchester’s relatively gentle tunes were overpowered by the onslaught of the disco craze and the rise of pop-rock bands like Fleetwood Mac and Boston. 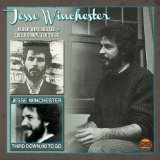 After his impressive run of studio albums in the 70s, and the solid Talk Memphis in 1981, Winchester lost his major label recording contract and has only recorded a handful of albums since then. Last year Winchester was diagnosed with esophageal cancer and the outlook looked grim indeed, but after undergoing radiation treatments and surgery he has been given a clean bill of health by doctors and is once again playing live club dates. Excellent news! 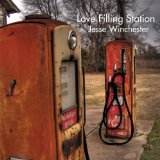 To help pay for Winchester’s medical care, his buddies Jimmy Buffett and Elvis Costello came up with the idea of doing a tribute album. The result is Quiet About It: A Tribute to Jesse Winchester, an excellent 11-song collection of tunes from James Taylor, Rosanne Cash, Buffett, Allen Toussaint, Vince Gill, Mac McAnally, Lyle Lovett, Lucinda Williams, Little Feat, Costello, and a duet from Rodney Crowell and Emmylou Harris. That’s as stunning a collection of living musicians as it gets, and if that doesn’t get you excited, you just don’t recognize good music. But due to changes in the music industry, not to mention the aging of the music-buying population, the release of an album chock-full of big names like this has barely made a ripple. I only found out about it while surfing online late one night. Whoa … what’s this!? The fact that the CD was released on a small label, Mailboat Records, doesn’t help matters either. 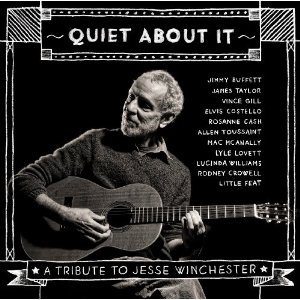 If you’ve heard Jesse Winchester’s music in the past, it should come as no surprise that his songs positively shine in the hands of the gifted artists on this collection, all of whom are devoted fans of Winchester. In Bill Flanagan’s excellent liner notes for the album he writes: “Elvis Costello points out that it is quite remarkable how every song on this collection fits the style of each singer so well that you could swear he or she wrote it.”

And that’s definitely the case. These artists take Winchester’s songs and put a distinctive personal stamp on them. Listen to Rosanne Cash easing into “Biloxi”, Lyle Lovett’s distinctive take on “Brand New Tennessee Waltz”, or Lucinda Williams putting everything she has into “Mississippi You’re On My Mind.” This is beautiful, emotionally powerful music. My favorite cut on the album is Mac McAnally’s tender cover of “Defying Gravity,” a song that Jimmy Buffett also recorded many years ago on his wonderful Havana Daydreamin’ album.

Tribute albums can often be hit and miss affairs, but each and every song on Quiet About It is a winner. Track this one down and buy it … and enjoy it!

On the Sweet Inspiration: The Songs of Dan Penn & Spooner Oldham album that I wrote about recently, one of my favorite tracks is Tony Joe White’s powerful cover of “Watching the Trains Go By.” Tony Joe White, is one of those singer-songwriters who is revered by his peers (no doubt there will be, or should be, a Tony Joe White tribute album someday), but woefully neglected by the listening public. 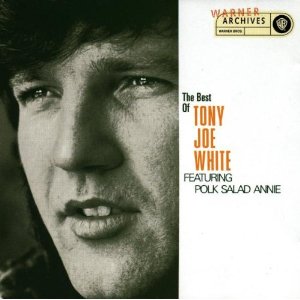 Listening to Tony Joe White’s songs, you can’t help but think of the swamps and bayous of his native Louisiana: muddy blues and funky country soul that are practically oozing with thick backwoods muck. White has been compared to the guitar troubadour J.J. Cale, and while that’s not a bad comparison, it doesn’t begin to adequately describe what White is all about either. For that, you really just have to listen to the songs, and let those swampy grooves sink into your brain. 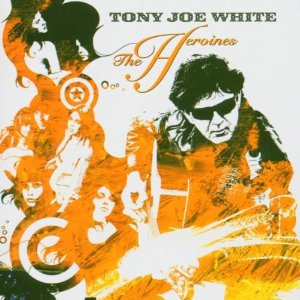 Tony Joe White gained fame as the writer of “Rainy Night in Georgia,” which was a big hit for Brook Benton way back in 1970. White himself had a minor hit with “Polk Salad Annie” the previous year, but he never capitalized on that early success and pretty much evaporated from the music industry a few short years later. I have a Best of Tony Joe White CD, containing 20 songs from 1969-1973, that I found a few years ago at a shop here in Bangkok. After recording those early albums, he virtually disappeared from the music industry for many years until resurfacing in the early 1990s. In the past decade he has been especially active, releasing several critically acclaimed albums. When I was in Kuala Lumpur last year, I was pleasantly surprised to find one of his recent albums, The Heroines at the Rock Corner shop in Mid-Valley MegaMall. Released in 2004, it’s a very solid batch of songs, many of them duets with female singers such as Emmylou Harris, Shelby Lynne, Jessi Colter, Lucinda Williams, and his daughter Michelle White. Listening to these songs, it’s clear that White has lost none of his verve and vigor. 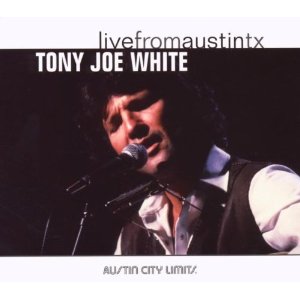 A live recording he did in 1980 for the Austin City Limits TV show was released on CD in 2006 as Live from Austin, TX. This album includes favorites such as “Rainy Night in Georgia” and “Polk Salad Annie,” along with cleverly titled tunes like “Mama Don’t Let Your Cowboys Grow Up to be Babies.” In 2010, White released a new album, The Shine, on the appropriately named Swamp Records label. I haven’t heard this one yet, but it’s getting good reviews. If I don’t find a copy during my next trip to KL, I may end up ordering it online. 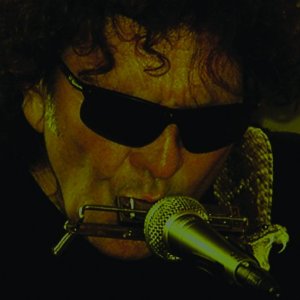