Andy Williams in a Winnebago

Many of you probably heard the news that legendary singer Andy Williams passed away this week at the age of 84. Most people would associate Williams with his huge hit 1960s “Moon River,” but when I think about Andy Williams the image of a dusty Winnebago motor home springs to mind.

To the best of my knowledge Andy Williams never sung about driving a Winnebago or recorded any odes to motor home romance, so I should probably explain such a seemingly bizarre association. During the early 1970s my parents owned a Winnebago and every summer they would pile me and my sisters into the vehicle for long distance trips around the Southeastern US (from our home in Florida), or further west to Colorado. During those road trips we had 8-track tapes constantly playing music from the likes of Jim Croce, the Carpenters, Elvis Presley, Glen Campbell, the Platters, and a few glorious K-Tel collections of recent Top 40 hits. And there was also a healthy amount of Andy Williams on board too. No trip would have been complete without Andy crooning the theme songs from “Love Story” or “The Godfather,” or his renditions of “Your Song” or “We’ve Only Just Begun.” Something about that voice of his was just very, very soothing. 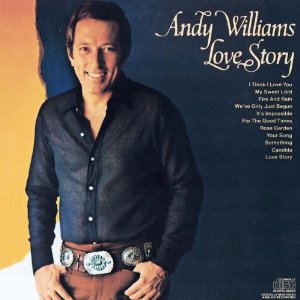 “Moon River,” of course, was his most famous song, and you got to admit, his version was a classic. In addition to that chestnut, he recorded a considerable amount of standards and middle of the road ballads such as “Danny Boy” and “Dear Heart”, so his recording output was not all exhilarating stuff. But he (or his producers) also had the knack for picking out cool contemporary cover songs to record, 70s gems like Glen Campbell’s “Wichita Lineman,” George Harrison’s “My Sweet Lord,” James Taylor’s “Fire and Rain”, Stevie Wonder’s “My Cherie Amour”, Neil Diamond’s “Sweet Caroline,” Gordon Lightfoot’s “If You Could Read My Mind” and many more.  And Andy Williams did those songs justice.

A few years ago, I saw a compilation of his “groovier” 60s and 70s material, In the Lounge With … Andy Williams on sale at a Bangkok CD shop. I just couldn’t resist buying that one. This album contained some percolating tunes like “Music to Watch Girls By” … “Can’t Take My Eyes Off of You” … “Windy” … “Up, Up and Away” … and “Raindrops Keep Falling on My Head.” Schmaltz never sounded so good. I later supplemented that CD with a more extensive collection of hits, The Essential Andy Williams. But that was enough for me: I bypassed getting any of his many Christmas music collections. I’m not that much of a masochist! 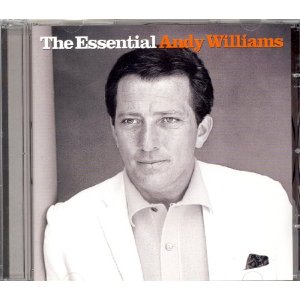 In 2009 Andy Williams published an autobiography, Moon River and Me. I haven’t read it yet, but I’ve got a secondhand hardcover edition sitting on the shelf at my bookshop, and if nobody buys it in the next week or so (I’ve got it displayed in the window right now, between Fifty Shades of Grey and an old Alfred Hitchcock paperback), I just may have a go at that one. Hell, if nothing else, I need some more non-fiction to break up my heavy diet of mystery novels.