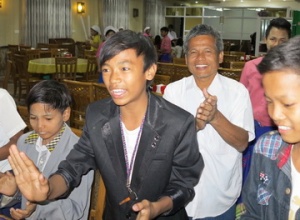 Yesterday was the birthday of my friend Chiet, so I took him out for a big dinner. Chiet is from Cambodia and I met him about 14 years ago when he was a little brat, wandering around the streets of Siem Reap, where I was running a bookshop at the time. We stayed in touch over the years, he grew up, and he is now working a construction job in the Bangkok area. Being nearby, we are able to meet for meals at least a couple of times each month. Normally we go to a Thai place on Sukhumvit Soi 49, but for his birthday I decided it was an occasion to splurge and treat him to something really special, that being the dinner buffet at the Sheraton Grande Sukhumvit Hotel. 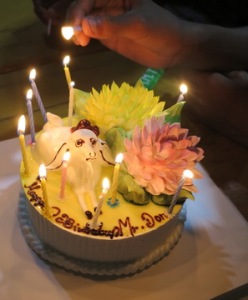 The one good thing about Chiet, besides being an all around nice and cheerful guy, is that he appreciates a good meal and can keep up with me when it comes to putting away some food. Thus, I figured he could put a good dent in the buffet spread at the Sheraton Grande Sukhumvit … and I was right. I jokingly told him that I’d be angry if he only ate two plates of food, so he did me proud my polishing off five plates. And, at the ripe age of 26, he also had his first taste of lobster, which he liked it quite a bit. 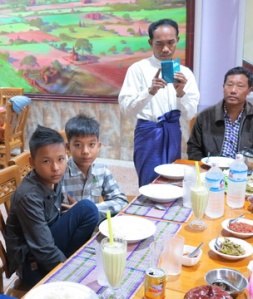 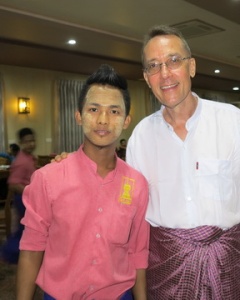 About two months ago I had my own birthday celebration while I was in Mandalay. The dinner spread wasn’t nearly as extravagant as the one I had with Chiet in Bangkok, but it was still pretty tasty and very memorable. I invited 15 friends from the 90th Street neighborhood that I frequent, including the teashop owner U Tin Chit, to have dinner with me that night at Aye Myit Tar restaurant. I reserved a big table for the crew and we were given very attentive service by Ko Ko Oo, Kyaw Myo Tun, and the other waiters. Ye Man Oo and his brother Ye Thu Lwin gave me a traditional Burmese shirt along with a gorgeous longyi. They insisted that I wear the new outfit to dinner, which I was more than happy to do. Two of the other kids, Baw Ga and Khang Khant Kyaw, ordered a big birthday cake.

Ye Thu Lwin explained the procedure for “distributing” the cake. I had to cut small pieces of cake and then feed each guest one of the pieces. Luckily, I manage to perform this feat without cutting anyone or dropping cake on the floor. But then came the part they hadn’t told me about: the food fight! Well, it wasn’t as wild as people throwing food around the room, but the kids — and the adults — soon started grabbing bits of the cake icing and smearing it on one another. Ah, good messy fun! I have to say, it was one of the more enjoyable birthday parties I’ve ever had. More Mandalay magic! 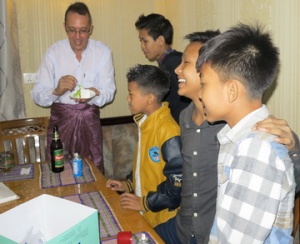 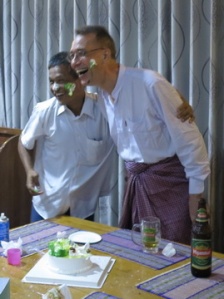 Comments Off on Birthday Dining

Sorrow in the Music World