As mentioned in my previous post, while I was in Myanmar in late November it was the time of the Tazaungdaing full moon and the annual balloon festival in Taunggyi, the largest city in Shan State, and about a 45-minute drive from Nyaungshwe. They have two decidedly different types of balloons at this festival. During the day they have balloons crafted to resemble animals — very large animals such as chickens, cows, elephants and pigs. I have yet to see a giraffe. But once the sun sets, the nighttime balloons come out, bigger and more traditional, but with one added feature: fireworks! Watching these giant creations launch upwards, shooting off flumes of colored light is indeed a spectacular sight.

I attended this festival about four years ago, taking a group of students and novice monks from Tat Ein village to see the day-time portion of the festival. I also took two groups of monks from Shwe Yan Pyay monastery in Nyaungshwe to the nighttime festivities, taking one group one night, and the other group the following night. It was fun, but the temperatures dropped considerably at night and I froze my ass off. Once it was all over, I vowed that was enough of the balloon festival for me.

But then came this year. After I realized that my trip coincided with the balloon festival once again, I just couldn’t bring myself to NOT take the kids from Tat Ein village again. I figured a simple day-time outing wouldn’t kill me, and besides, I don’t think there was anyone at the monastery or at the primary school who had gone on our previous outing, so this would be a new experience for all of them. 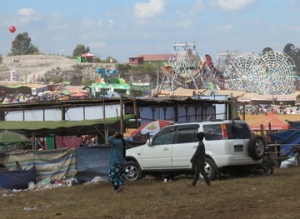 This time around I rented three “light trucks”, enough to hold the 90-some people in the group; students, novice monks, teachers, and a couple of adults from the village. Upon arrival in Taunggyi, the roads were packed with vehicles going to the festival; cars and trucks and vans and motorcycles and a variety of other wheeled contraptions. It was slow going, and once we reached the main gate, we were told to turn around and go to another entrance, causing even more of a delay. 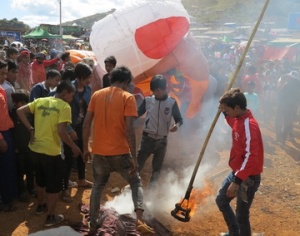 Long story short, the festival this time was a dud. We were at the main balloon grounds for nearly two hours and not a single balloon was launched. Oh, they tried. Time and time again. But strong winds made it difficult for the “torch bearers” to create enough smoke under the balloons to launch them. Funnily enough, the kids didn’t seem to mind too much, content to sample the variety of food that was for sale at the site. Man, those monks can put away some food! And I keep forgetting; they don’t have snacks and goodies like this in their village.

Some of the kids wanted to go on a big Ferris-wheel type ride, so I bought tickets for the ones who wanted to ride; a few boys, some of the monks, and almost all of the girls! Judging from their reactions after the ride was over, they enjoyed it very much! Instead of waiting around to see if any balloons were going to be successfully launched, we left the grounds and headed to a local hilltop temple, where the kids all enjoyed posing for photos, the girls all dressed in their finest for the occasion. While we were at the temple, someone looked skyward and pointed; there were three balloons — animals becoming distant specks — floating towards the clouds. Oh well, better than nothing! 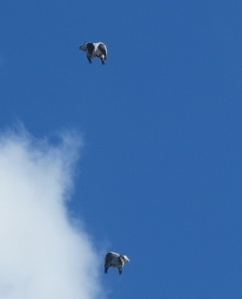 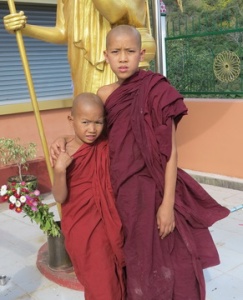 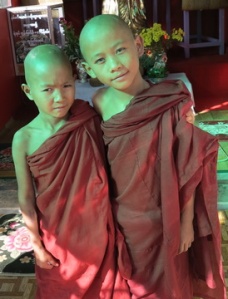 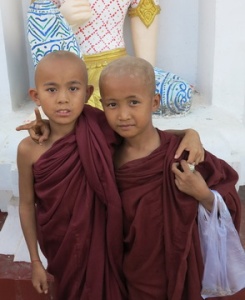 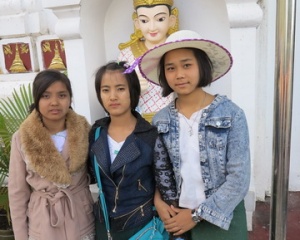 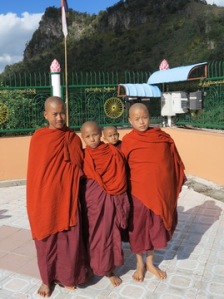 Comments Off on Balloon Festival Here We Come!

Morning Monhinga for the Monks!