Hillary Clinton has been back in the news lately, thanks to the backlash about the outrageously high fees that she commands for speaking engagements, the publication of her new book, and a few choice comments she made about current US foreign policy. 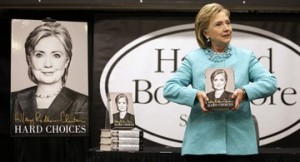 About two months ago there was a short interview with Clinton in the New York Times, one that focused on books that she enjoys reading. This book interview column is a regular feature in the New York Times and I always find it fascinating to find out what various authors like to read when they are not writing, what they read when they were growing up, or in some cases the classic books that they admit to not having read yet. Here are a couple of excerpts from the column that featured Clinton:

Who are your favorite contemporary writers? Are there any writers whose books you automatically read when they come out?

If you had to name one book that made you who you are today, what would it be?

“At the risk of appearing predictable, the Bible was and remains the biggest influence on my thinking. I was raised reading it, memorizing passages from it and being guided by it. I still find it a source of wisdom, comfort and encouragement.”

Well, she had me pleasantly surprised there for a while, picking authors that I also enjoy reading such as Daniel Silva, Alex Berenson, Laura Hillenbrand, and Alexander McCall Smith. But then she blew it with the lame Bible pick. I’m not sure if that was an “astute political choice” or truly a sincere personal pick, but either way it dismisses her in my mind as yet another religious wacko.

I’ve made these comments in past posts, but my feelings remain the same if not stronger: religion has no place in politics. If you are telling me that the Bible influences your way of thinking and how you make decisions, then I sure as hell (or should I capitalize that as a proper place name?) don’t want you holding elective office and making laws that affect my life.

In the United States a big deal was made about fifty years ago when John F. Kennedy was elected president, making him the first Catholic to hold the nation’s highest office. In the last US presidential election the fact that Mitt Romney was the first Mormon to run for office was also a source of curiosity. Personally, I’m waiting for the first atheist to run for office, someone who has the intelligence and fortitude to declare that they are not a superstitious half-wit who belongs to an organized religion. Please, just give me one such honest person.

I get so sick of seeing the same types of people elected to office in the USA. Most are career politicians with backgrounds in law, or perhaps they have some business experience. But do we really want more lawyers and MBA types running our government? Why don’t we elect scientists, teachers, economists, or people that actually have the brains and experience to effect change and make our lives better? Enough with these money-raising talking haircuts and dangerous religious fundamentalists; it’s time for real change. And even though she would be the first female president if elected, an insider like Hillary Clinton — especially one that apparently holds diehard religious beliefs — does not represent change for the better.

Sorting Out the Monks