I had dinner last Tuesday with two of my favorite people; Janet Brown and Ma Thanegi. Janet, now living in Seattle, had been in town for a week already, but Thanegi has just flown in from Yangon that morning. We met at my bookshop and then made plans to eat at a Thai restaurant on Thonglor. To make the journey easier I called one my motorcycle taxi friends, Bay, and asked him to bring a couple of other moto drivers to the shop to pick us up. Traffic was looking scary-bad, but within 20 minutes he and his buddies arrived and then whisked us away to the restaurant. I tipped the drivers generously and told Bay that he and his friends were welcome to join me for dinner whenever they had free time. Of course getting that free time is no easy task for these guys. They work insane hours with no days off. Anyway, Janet and Thanegi and I had a feast at the restaurant. Good food and good conversation; it was the perfect night. 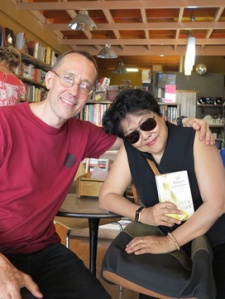 The next day Thanegi stopped by my bookshop to buy a few more books. This time I remembered to snap a photo! A few days later I was treated to a surprise visit from Beth Goldring from Phnom Penh. Beth founded the Brahmavihara Cambodia Aids Project in 2000, the same year I met her. She’s also there in the top ranks of my favorite people category; a truly amazing, inspirational lady. It was a busy Saturday when she dropped by my bookshop, but I made time to sit down and chat for a while. As usual, Beth is in the middle of several projects and planning another fundraising trip to the US later this year, but she stocked up on mystery novels while she was in my shop.

And later that night, Bai and three of the motorcycle taxi drivers on my street dropped by my apartment to hang out and listen to music, the usual “Songs for Life” fare such as Pongist Kampee and Carabao. They’re a curious bunch — I don’t doubt I’m their first farang friend — and they pepper me with all sorts of questions, and I return the favor and ask them a bunch of stuff too. My Thai is still not fluent, so some of what they are saying doesn’t always register, but for the most part, we can carry on a semi-coherent conversation … and that thrills me. I truly enjoy their company.

Today is Valentine’s Day of course, but here in Thailand the date this year also falls on an important Buddhist holiday, Makha Bucha. Loving kindness and love the one you’re with; a great combination! That got me thinking that I should expand the theme of my post today and write about life and love and good friends, all those things that I often take for granted. This year I’m reflecting more on this sort of stuff as one of my best friends remains bed-ridden in a local nursing home, basically waiting to die. And mortality reared its ugly head last week when I got an e-mail from another good friend, So Penh Thay in Siem Reap, Cambodia, telling me that his father had passed away the day before. I wrote back, and also called him, but I feel that any words of sympathy on my part were inadequate. 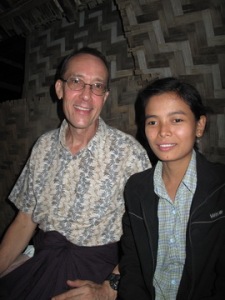 Another one of my favorite people, Khin Nwe Lwin in Mandalay, sent me a couple of e-mails last week, attaching MP3s of some Burmese songs for me. She’s also been helping me keep track of people and things around the 90th Street neighborhood in Mandalay where I have many other friends. There’s a troubling issue with one of the kids there, but I’ll save that story for another post. But the main thing is that she is supportive of my efforts to help these kids and I really treasure our friendship. 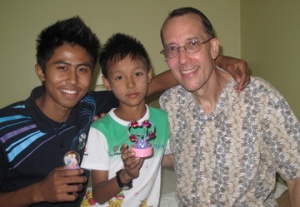 Also in Mandalay, I can’t forget about Zin Ko and Moe Htet Aung, two stalwarts of the 90th Street crew who I take on field trips when I’m in town. During the past two trips to Mandalay, Zin Ko and Moe Htet Aung have also become my nightly dining companions, usually at Aye Myit Tar Restaurant on 81st Street. It beats dining alone, and they are nice, polite kids, so I’m always happy to have them tag along. My birthday happened to fall during the time I was in Mandalay last trip and Zin Ko and Moe Htet Aung gave me gifts, one of which was this cute little stand with plastic swans and hearts that lights up when you flip a switch. “When the light comes on you will remember us,” Moe Htet Aung told me. Indeed I will!

On this Valentine’s Day, I send out hearts and arrows of love to all the friends and fine folks who continue to put up with me. And a Happy Makha Bucha Day too!

Last Tales of the City?