Monks Among the Ruins 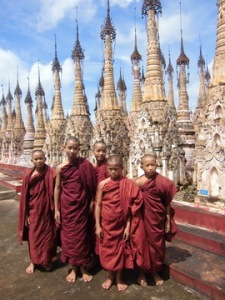 Back to Kakku again? Yes, indeed. This was my fourth trip to the isolated grove of ancient Pa-O stupas in Shan State’s Kakku, but it wasn’t my decision to go there. I left the choice up to the novice monks at Shwe Yan Pyay Kyaung in Nyaungshwe, specifically one of the monks, Pyin Yo Sawdaw, who told me that the sacred site of Kakku was his destination of choice. 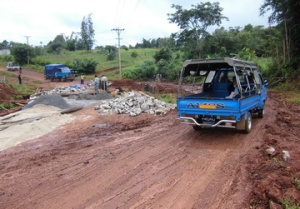 Over the years I have taken groups of monks from Shwe Yan Pyay on field trips to places on interest in the area such as Taunggyi, Kakku, and the Pindaya Caves. Two years ago I ended up taking the entire monastery to the annual balloon festival in Taunggyi. But since that trip I’ve returned to Nyaungshwe twice, but haven’t taken the monks anywhere, opting to take the kids from the village of Tat Ein on trips instead. So, I was feeling a bit guilty lately, thinking I’d been neglecting the Shwe Yan Pyay monks, so I decided to give them first dibs on a trip this time. Pyin Yo Sawdaw is a really nice kid, and without a doubt the friendliest monk at the monastery. I’ve known him for several years and he always makes a point to talk to me when I visit the monastery. At this point he’s also the only one I know by name, all of the other long-timers that I knew have “graduated” to other monasteries in the region.

Prior to my arrival in town, I asked my friend Htein Linn to drop by the monastery and tell Pyin Yo Sawdaw the date when I would be coming to town, so that he could make any necessary preparations for the trip, such as getting permission from the Saya Daw, the abbot at the monastery. When I arrived in Nyaungshwe I dropped by Shwe Yan Pyay the first day and talked to Pyin Yo Sawdaw, and we agreed to go on Saturday that week. I told him that I’d rent a van, which meant that we could take about six monks. I also had a nice chat with the Saya Daw while I was there and he gave his blessing for the trip. It looked like we were good to go. 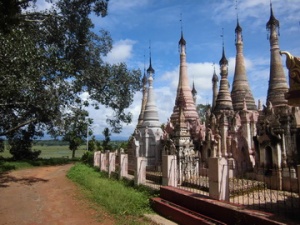 Or maybe not. When I arrived at the monastery on Saturday morning and rounded up the monks, Pyin Yo Sawdaw was not with the others. A few minutes later he showed up, but told me that he had to stay at the monastery and study. Normally, this kid is all smiles, but on this day he looked quite dejected. I’m still not sure what the problem was, but there wasn’t anything I could do to force the issue, so I gathered the other six monks and we boarded the van for the first leg of the trip, the 45-minute drive to Taunggyi.

Any foreign visitor to Kakku must first stop at the Golden Island Cottages office in Taunggyi (they are the administrators of the site, enabling that the Pa-O villagers in that area get a share of the proceeds) and pay the entrance fee and the guide fee. Our guide this time was Nang Khan Moon, a personable young Pa-O woman who had recently graduated from high school and was preparing for her first year at university.  She was working as a guide during her break. 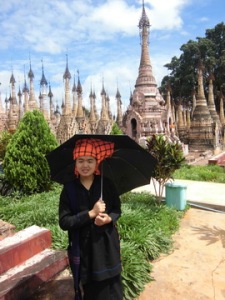 The problem, though, was where to put her in the van! Due to Buddhist protocol, women are not supposed to touch monks, and even sitting next to them is frowned upon. Giving her the front seat was one option, but usually that perk is also reserved for monks. Then again, we were dealing with novice monks, so it seemed as if we could bend the rules a bit, and so we did. Nang Khan Moon sat in the front seat for part of the journey, but after one of the monks got car sick (and we talking puking-his-guts-out type of sick), we moved him to the front seat next to the driver, and Nang Khan Moon sat between me and another novice monk. No one seemed to mind that arrangement, so that ended up not being a problem at all.

The monk that got sick was one of the older ones, and one who had travelled with me two years previously during a trip to Taunggyi. He had no problems on that trip, so I don’t know what caused him to get sick this time, but he was the only one in the group who lost his breakfast. It was bad enough that when we stopped for lunch in Taunggyi (in keeping with that always tricky Buddhist protocol, we had to eat well before noon) he didn’t eat a thing, and when we arrived at Kakku he stayed behind with the driver and didn’t walk around the site with the rest of us.

I felt sorry for that kid, but I also was still feeling bad that Pyin Yo Sawdaw couldn’t have joined us, so I bought him a Kakku souvenir photo book, along with some postcards from one of the important pagodas in Taunggyi that we visited on the way back (more details about that leg of the trip on a future post). The trip hadn’t exactly gone as planned, but these six monks — well, at least five of them — seemed to have enjoyed the outing very much. One of them, in a gesture that was out of character for these normally very sedate monks — none of whom speak much, if any, English — profusely thanked me afterwards. That alone made the whole outing worthwhile. 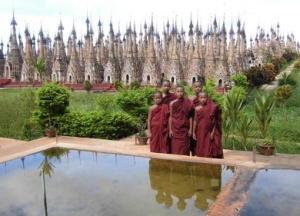 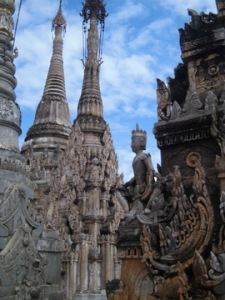 Comments Off on Monks Among the Ruins

The Road to Steve Young and Ian Matthews

Out of Focus and Off the Road