During the full moon period of Tazaungmon in November — the same time as the famous balloon festival in Taunggyi — there is also a ceremony called Kathein that is held in villages and cities throughout Myanmar. During this important ceremony an offering of “Holy Robes” are given to monks in area monasteries.

In addition to the traditional giving of robes, Kathein has spread to include donations of other kinds. Items ranging from toothpaste and soap to noodles and crackers, and especially bank notes, are collected and given to monasteries. Some of these donations are collected and decoratively mounted on stands that resemble trees. During my recent trip I saw these “Kathein Trees” everywhere; in homes, restaurants, street corners, schools, and shops. I asked my friend Ma Thanegi, who lives in Yangon, for clarification on this Kathein thing, specifically the name of these tree-like donation displays. She told me that they are called Padaythar Pin in Burmese, which roughly translates as “Tree of Plenty,” although she prefers the term “Tree of Treasures” because she thinks “it sounds nicer!” 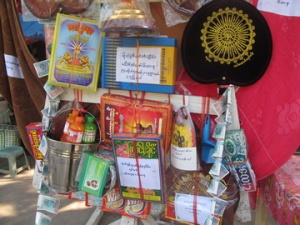 Traditionally, the collection of Kathein offerings starts after the Full Moon day of Thadingyut in October and lasts until Tazaungmon comes around in November, the exact dates of which are always changing according to the lunar calendar. I didn’t make it to the Kathein ceremony when I was in Taunggyi this time, but it’s renowned as being the most spectacular in all of Myanmar, with “a thousand and one gifts” donated to local monasteries. 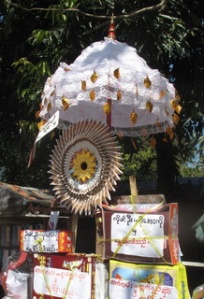 Comments Off on Kathein Treasure Trees